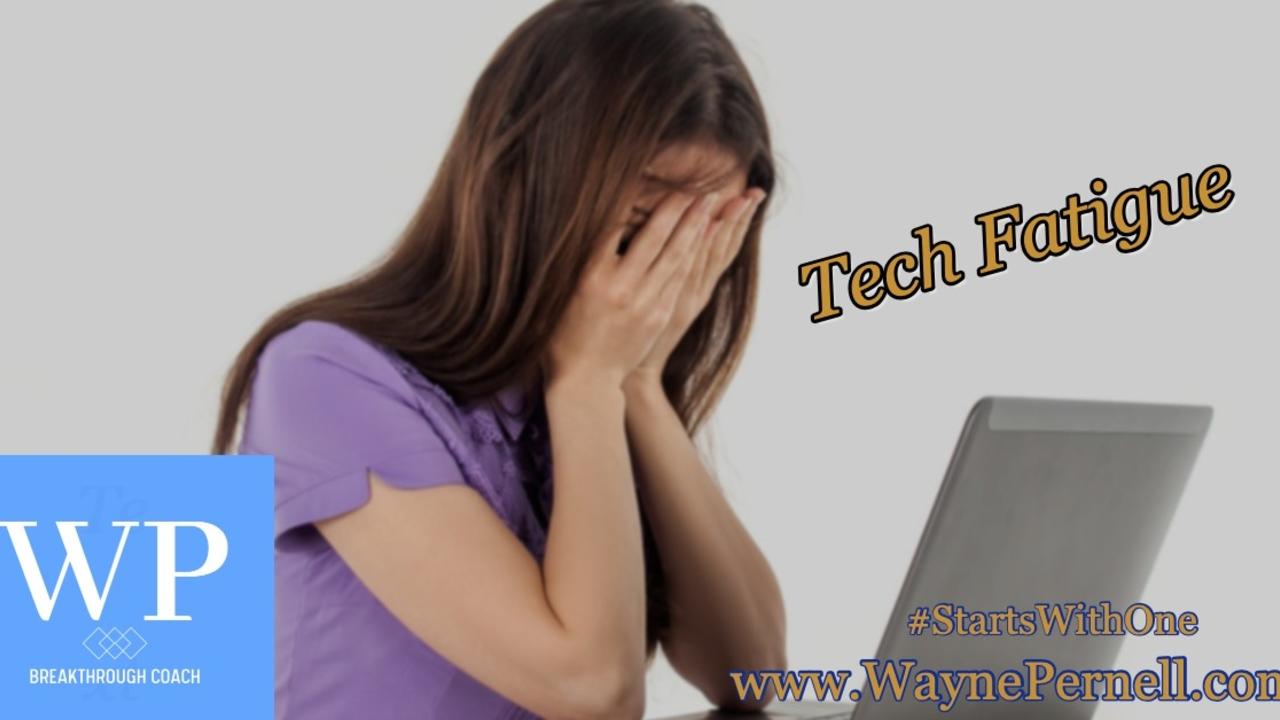 People ask me what I talk about when I do TV and radio.  This week, I’ve been on eight different radio stations across the country and I’ve been interviewed on three TV stations (CBS, Fox, and NBC) and the week isn’t over yet!

My team and I connected with the media to talk about what’s topical.  It’s similar to this Wednesdays With Wayne for you!  I tend to relate what’s going on for me or for my clients.  Let’s look at what’s going on for all of us as we’ve been working from home.

Tech Fatigue is a thing!  We’re exponentially online now more than ever.  Just two months ago we told our family members to put the tech away and connect with someone.  Now we’re pulling out the tech in order to connect.  And multiple factors cause tech fatigue.

First, we’re online exponentially more.  One executive I spoke with recently told me that his days have become back-to-back Zoom meetings for 12-14 hours a day.  Most of us are seeing an uptick in our online time – it is exponential and what’s statistically typical is six hours.  That’s still quite a lot and certainly can cause fatigue.

Being On is an issue.  If you’re feeling like you’re being watched and need to be ON for six hours a day, it’s draining.

Posture is a thing.  Being in online meeting after online meeting means you’re sitting substantially more than usual.  Your slouching posture affects your neck and your back, not to mention your ability to breathe fully if you’re sitting in a way that constricts your lung expansion.  And while it may seem obvious, what I know is that common sense is not common practice.  So here’s your alert:  Not breathing can cause fatigue.  You can rectify that right away.  Just sit up and take a breath!

Eye strain is a major factor in fatigue (and symptoms of depression) as well.

Oh, and there’s one more thing most people would overlook!  The roles we have in the world have all blended.  Now, I’m a big fan of being in alignment with who you are at work, at home, and in the world.  Be you.  The thing is that (unless you’re a freelancing entrepreneur) we’re used to having a mental shift.  At work we play one role.  We drop that in the driveway as we come home where we play another role.  And as we venture into the community, we’re known in other capacities.

By staying in and having no real shift in roles, we feel a burden to get it all done.  This isn’t really tech fatigue, though it certainly plays a role in feeling like you need a break.

Remember that the habits/actions that you practice today create the consequences or results you’ll see in a month or two.  There’s talk of “the quarantine 15.”  I didn’t know that was a thing.  Some of my friends have lost 10 pounds, and I’ve been able to up my exercise.  That’s a habit I’ll hang onto.

And this comes down to getting really intentional.

Create the life you want to be living in two months into two years down the road.

Let me know how you’re doing with all of this.

Let me know how I can best support you on your journey.

Psssssttt: The next Powerful Presence™ online masterclass is June 26th at 11am pacific time.  There’s no-cost for the class.  This time I will be asking for a small donation to go to a charity that helps girls around the world gain access to education and empowerment.  Details coming.