The Dangerous Climb To Black-Belt 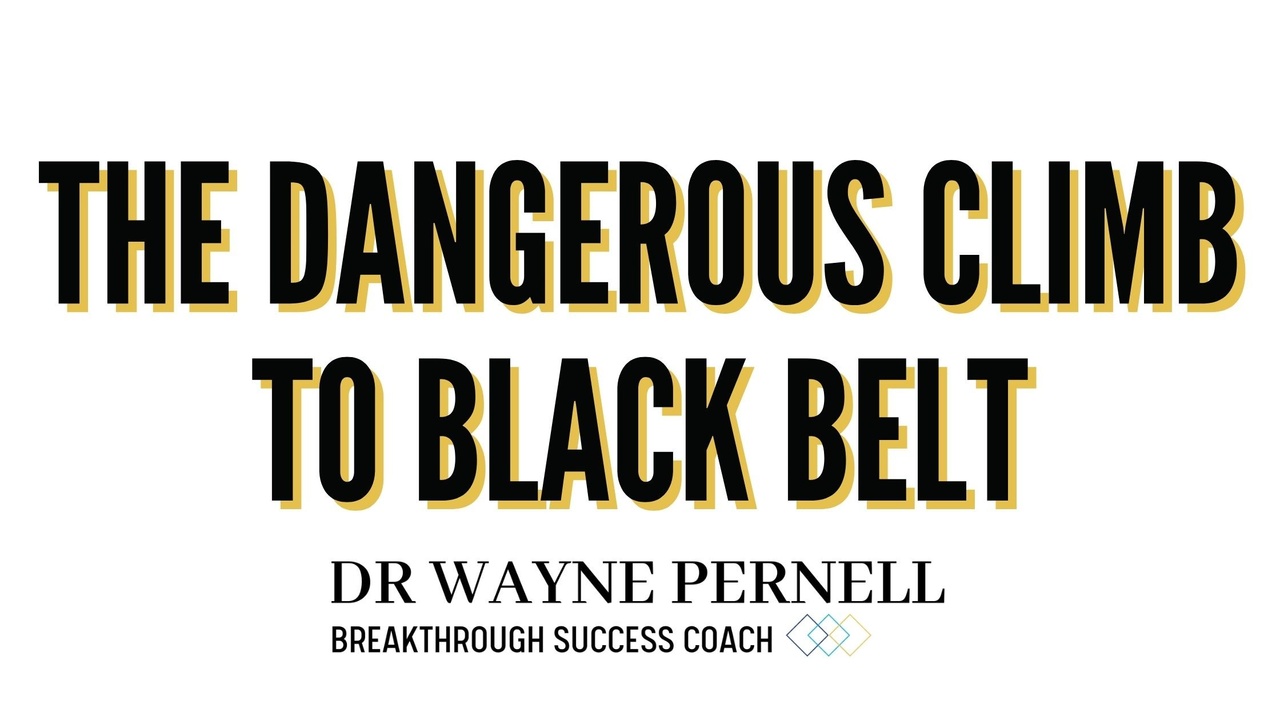 I’m a fourth-degree black-belt in a multi-disciplinary martial art of The Way of the Warrior, Bushido. I taught for almost thirty years, developing kids through the ranks, helping them grow into powerful beings in the world. And in some ways, I guess I’m still doing that with my clients. I bring them from feeling like they want to be bigger in the world to those who not only have power, but in turn lift others to feel more empowered.

There are certain pitfalls and dangers that are concomitant with advancing along the path of the martial arts. They are the lessons we need to look at and they become the collective push needed to keep going.

When I was coming up through the ranks, the drive to keep going was fueled by the knowledge I was gaining. My thinking was that being a black belt would make me a super-human somehow. In some ways, it’s like looking up to the leaders of major corporations and modeling yourself after them. In the 80s, people followed Jack Welch, Lee Iacocca, Bill Gates, and Steve Jobs. The Type-A personality was highlighted, touted, and heralded before it was vilified. “I’ll sleep when I’m dead” became a battle cry of many.  In short, we equated power with force.

I was learning things in the martial arts that mere mortals would never know. I moved from white belt to yellow belt. I was told to get a little more aggressive and train as if I was going to break my nose. “Get in there!” As a green belt, I became powerful, mighty, and dangerous.

We see that kind of mindset take over the thinking in new leaders. There’s a sense of knowing it all and feeling invincible. Unfortunately, we see that in adolescents, as well. The green belt, the new leader, and the adolescent know enough to do damage, but don’t have the experience to be truly effective.

At the brown-belt level, skills have been mastered to the point that a junior-level mentorship role might be bestowed.  Again, in parallel with leaders who have advanced a bit comes the potential for ego to kick in, blinding the student (or leader) to the process of continued learning. The power is intoxicating. “I know more than you. I have more status than you. I’m inches away from joining that coveted inner circle….” The climb is seductive to the climber. The parallel to those in leadership is so easy to see.

The good news is that the climb does continue. The hours are put in. The experience is gleaned. By the time there is a breakthrough to blackbelt, one of two things will happen: Either the new black-belt will stop, having attained the coveted prize, or the new black-belt will become enlightened, recognizing that the path that got them there only paved the way to begin the true journey.

This is the journey of real leadership. The investment of time, money, blood, sweat, and tears yields a deep awakening that this is where the real learning begins.

Mastery isn’t a destination, it’s a process. It’s a verb. It’s fleeting. And when you become comfortable with that, you’re not only ready and willing to continue to learn, you’re called to do so.

Only in continuing to grow can true mastery happen. People have asked me what it takes to get a black belt. I’ll tell them that it takes six dollars.  The truth is that it takes a lifetime of dedication to growth; there’s a lot of inner work to do.

And the same is true for leadership. You can attain status by taking certain steps. And then you can stop, satisfied with your title. Or you can be happy with your title and choose to keep learning and growing, recognizing that your work isn’t done. The master’s work is never done. Personal and professional growth only stop when you’re ready to start your backslide into decline.

Luckily, that’s a deliberate choice and you’re not ready for that. So, keep going and keep growing and I’ll see you here next week.

Maybe it really IS your time to leverage the concepts of leadership, authenticity, desire, and goal setting to a bigger, more satisfying life!  You owe it to yourself to check out my small-group signature mastermind. It’s a breakthrough success group; join us in San Francisco in September!  That’ll be here before you know it!

NOW is the time to hold your seat! With just a dozen people in the room, the time to decide to be there is now! Go to www.StuckAtTheTop.com and get ready to break through to your next level of success!