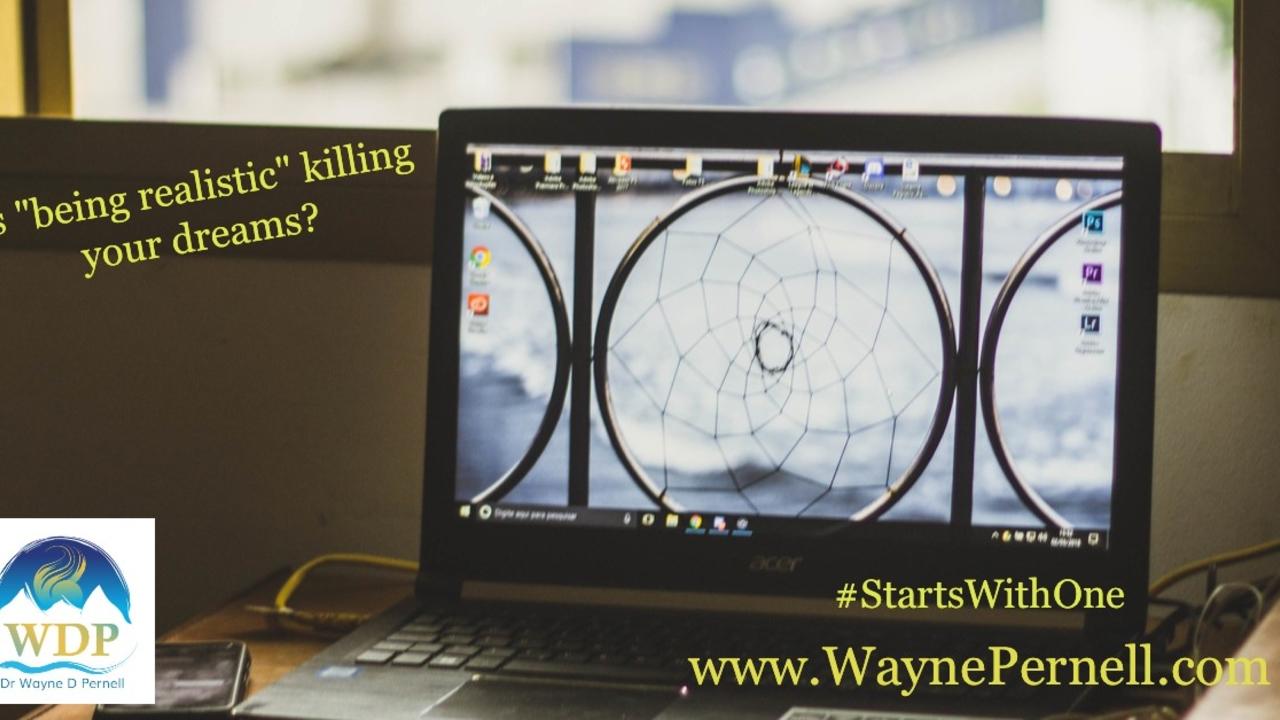 We have good intentions.  The term is API or POGI which stands for Assume Positive Intent and Person of Good Intent.  Frame interactions that way and you’ll be better off when you’re in conversation with someone.

There are people of good intent who shut others down inadvertently.  They’re just trying to help when they bestow their hard-earned wisdom on another.

And the conversation comes to a crashing close with the phrase, “You just need to be realistic.”

There’s a word that kills dreams and that “killer” R word is: Realistic.

What’s realistic for someone with a dream is far from realistic for those without.  I have a dream to touch people’s lives in such a way that a ripple of true intentional support of others is a mindset shift for the world.  For some, it means congratulating them on their efforts.  Others need to be reawakened. And others need education. My goal is to teach, touch, and positively transform the lives of a lot of people.  A LOT of people.

We don’t know the extent of the ripples we make when we’re deliberately, actively, and positively uplifting in the life of one other person.  And that deliberate, active, positive action #StartsWithOne.

As individuals, we’ve never been more connected through our tech and new statistics are showing us that 80% of the population feels more disconnected and alone now more than ever.

So I have to be a little “unrealistic” because I believe in rehumanizing each other, one person at a time.  Painting someone else’s idea or worldview as unrealistic only speaks to the limited view that’s held.

For example, it seems that we “boomers” have a problem in painting millennials with a broad brush of “they all….” The problem extends to the notion that their ideas (all of them, all the millennials and all of their ideas) are just not realistic.  Who are we to say what’s realistic and what’s not? It is a different world from the one we grew up in.  And our world was different from that of our parents and grandparents. Sure, it changed a little more slowly than what we’re seeing now.  And… you must admit, the world is changing rapidly.

Is it realistic to carry a pocket-sized super-computer and communication device?  I could go on. And while we’re disconnected as a result of distraction, living without our tech is now the thing that’s unrealistic.  Ironic, right?

So, who are we to say what’s “realistic” and what’s not?  Who are we to poop all over someone else’s dream?

Step in and ask these questions:

And for you - what unrealistic goal did you let die because you or someone else judged it that way?  What can you tell me about that? (Leave a comment!!!)

What would happen if you reawakened that “unrealistic” dream?  What made it so important? Could it be important again? If you started it or re-started it, how long would it take?  And what help would you need to achieve it?

Now, Think Even Bigger!!!  Be a little unrealistic and let’s live a little more fully expressed.  That can be a Thanksgiving gratitude statement. It can be a New Year’s resolution.  Start now. Step into your bigger dreams. Become who you deserve to be and who you were meant to be.  It’s NOT too late to start.

This stuff starts with you.  Yep. This stuff #StartsWithOne